We offer both immediate release and encapsulated delayed release version.

Specifications of HT Encap or Encapsulated Breaker based on Ammonium Persulfate are as under:
Active matter: Ammonium persulfate 75-80%
Coating: 16-23%. Higher or lower coating percentage is preferred depending on down-hole temperatures.
Mesh size: 25-40mesh
Release time: Does not release at room temperature and negligible release up to 50°C or 125°F. Releases slowly when temperature is increased to 65°C or 150°F. Almost all the active matter will be released in 18 hours at 65°C. The material can be designed to give quick or slow release.

Coated or Encapsulate Ammonium Persulfate, based coated chemical to be active at 140°F or 60°C called low temperature delayed release gel breaker is used for breaking gel up to temperatures of 200°F or a little more.

Please Click on the image to Enlarge
When tested at higher rpm with sand in the breaker, it dissolves 70-80% in 6 hours.

An independent chemist of a user has reported the following viscosity change profile of comparison of our product Ammonium Persulfate based Encap with another one. 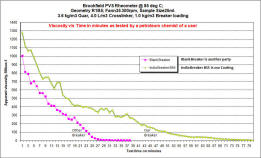 Compatibility: Compatibility with brine, calcium chloride, KCl solutions as well as all known fracturing fluids, gels, cross-linkers and additives. It is extensively used in oil well drilling, fracturing or fracking.

Environment: It is not hazardous to the environment.